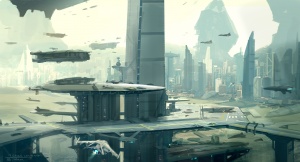 A spaceport on Terra

A pilot's spacecraft is the primary way a player character will interact with the Star Citizen universe. Spacecraft are available in a large variety of sizes and vary in what roles they are best suited for.

Spacecraft can be reconfigured by upgrading and replacing various components. There are three broad categories of components:

Several companies compete in the mass production of spacecraft. The better-known ones are: